A lot of time, effort and money can be save if one has the right tool in hand. One such useful device is the thermal imaging camera which EcoSoch has invested in. It is important that electrical components work correctly and in case of any fault, it should be detected as early as possible and rectified before it becomes a major hazard. Thermography fastens fault detection since a thermal camera highlights heat dissipation of components and without the need for human contact thus ensuring safety of the electrical personnel.

In Jan 2020, we received a call from Adarsh Residency where we had installed a 97 kWp system across various blocks that their system was not generating properly. Upon inspection using the thermal camera, we notice that the incomer from the main bus bar in their LT panel was burn (B phase) as shown. Access to such points become difficult for maintenance team. But using the thermal camera, it was detected easily and rectified. 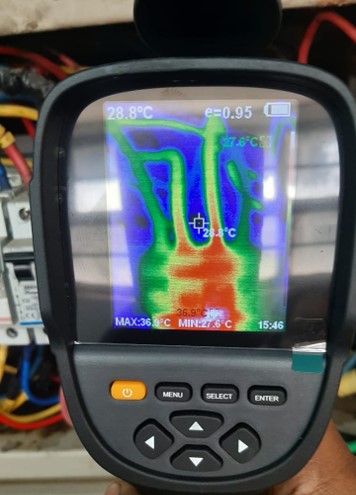 With thermographic camera, we could find out that the heat was getting dissipate around the fault wire. This helped the maintenance team to easily find the issue and resolve it at the earliest.

Similarly, at Jal Vayu Vihar (Bangalore) where we have installed a 20 kWp system, there was an arc formation in their LT panel that was not visible to the naked eye as the arc was forming behind a fuse. This arc too was detected using our thermal camera. Arc formed in their LT panel due to improper torquing of terminals by their electrician and not using terminal lugs. You can see the video of the arc formation below: 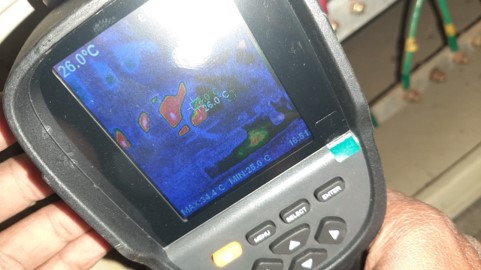