“Lead acid batteries should be discharged only by 50% to increase its life” – is an oft used phrase. This means that we should cycle them in the 100% to 50% window as shown below in the Typical state of charge window parameter. So it follows that the usable capacity of a lead acid battery is only 50% of the rated capacity. So if you have a 100Ah battery, you can only use 50Ah. In this blog, I will provide reasons as to why this is so. 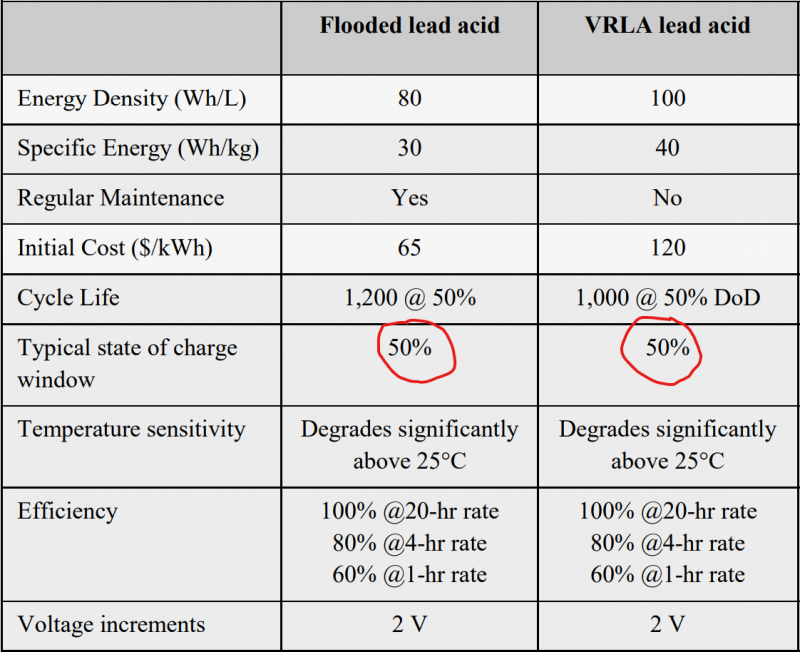 However, they can be discharged for up to 80% as per below chart:

In the above chart, AGM battery’s performance in a moderate climate (average temperature of 25°C) has been depicted wherein if the DoD is 80%, the battery would provide only 500 cycles or just about 1.5  years of life (if cycled daily) whereas with 50%, you can get 1000 cycles or ~3 years of life.

This cycling zone is also illustrated in the below table: 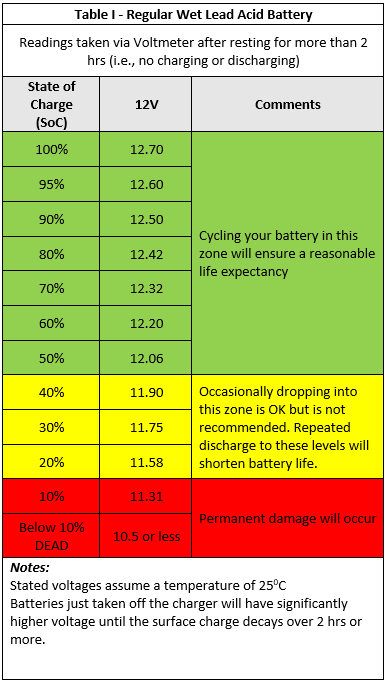 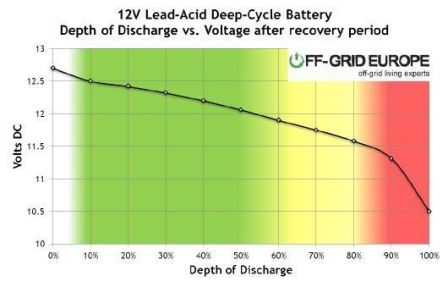 The yellow region past 50% is not overly damaging to your batteries, but consistent cycling to this level will shorten their lifespan. Clearly, the red region past 80% should be avoided unless absolutely necessary, say in case of emergency. Therefore, 50% represents a good balance between capacity and cycle life, also taking into consideration the cost of replacement.

So why should we not discharge more than 50% for lead acids? This is because if the DoD is more than 50%, it would reduce the life of the battery. How & Why? 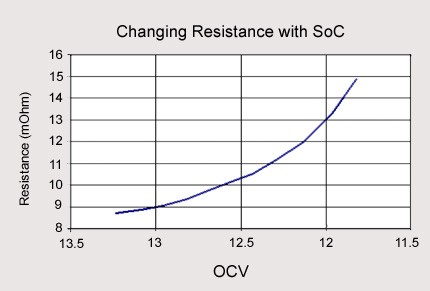 Following are the reasons:

Internal resistance increases because of the decrease in the specific gravity, a depletion of the electrolyte as it becomes more diluted.

In fact, studies have shown that the internal resistance highly increased during the cell recharge after an over-discharge. This process and the increasing gassing caused temperature to rise inside the electrode undergoing the recharge. This has a serious influence on aging specifically on the loss of capacity because there is high temperature increase and gas flow at the same time. Basically, it will impair the battery’s ability to accept a charge.

There are additional reasons too:

If you need more information, you can refer to the scientific paper “Internal resistance and temperature change during over-discharge of lead-acid battery” by Balázs Broda and Gyorgy Inzelt.

Now the question begs, “How do we ensure that we don’t discharge below 50%?”

For this we need to set the Low Voltage Disconnect (LVD) parameter in the Inverter to a voltage value that indicates 50% DoD. So should we refer to Table 1 and set the LVD to 12.06V?

Battery voltage will vary for the same state-of-charge depending on whether the battery is being charged or discharged and what the current flow is in relation to the size of the battery. The chart below will give you an idea of state-of-charge for various battery conditions in flooded cell lead-acid batteries:

To understand the difference between Resting voltage and Voltage-under-load, let’s look at the test that was done by Rod “RC” Collins and the inference. In that test, an AGM chart like below was compared with the Actual Voltage under load. 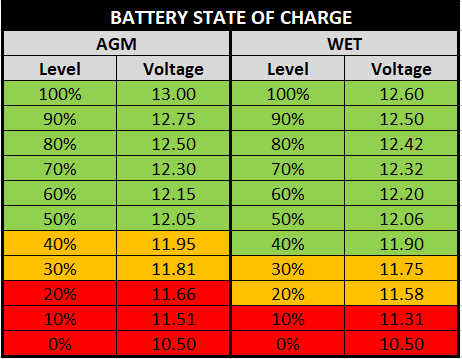 At the end of the test, we notice that the actual voltage under load is quite different from the resting voltage in the real world:

In that test, after resting the battery for 16 hrs, the resting open circuit voltage rebounded to 12.32V. If we have a look at the chart above, 12.32V falls within the 70% to 80% range for resting voltage which would lead us to think that the battery is at around 70% SoC and that we can still continue discharging. However, in the actual sense, battery is already at 49% SoC. So if we continue to discharge this battery, it will go further below the 50% DoD mark and kill the battery.

Experienced users use no more than 50% of the energy available in a battery before recharging. That means they never let the resting voltage get below 12.3V. If resting voltage ever reaches 12.1V, we know that the battery has been deep-discharged one cycle and that a battery is good for only so many cycles (from as low as 20 in an automotive battery to 180 in a golf cart battery, with the typical battery sometimes good for no more than 30 cycles).

In that test, the battery bank is crossing the 50% SoC threshold at ~12.1V. This means on your average bank you should discontinue discharging at somewhere around 12.15V to 12.2V+. I would strongly urge you to begin recharging at a maximum under-load voltage of 12.2V because your average discharge rate will be lower. This 12.2V would be the LVD to set in the inverter.

As a parting thought, note that – Most batteries fail, not because they are over discharged, but because they are never fully recharged. So it is absolutely critical that lead acid batteries are always fully charged after every discharge to have a long life. Thus Absorption phase is the most important part of the charging cycle. The absorption charge is essential for the well-being of the battery and can be compared to a little rest after a good meal. If continually deprived, the battery will eventually lose the ability to accept a full charge and the performance will decrease due to sulfation. Thus when a battery is not at a fully charged state, sulfate crystals build on the plates and this robs you of power. So it’s the healthiest thing for a battery to be at 100% state of charge.