In the lithium ion battery, if it says 100Ah, you get 100Ah. With the lead acid battery, typically, if you look at the data sheet below, you will get a 1000 charge cycles with a high quality AGM @ 50% depth of discharge and that’s very important.

A lot of people typically stick with 50% with the lead acid batteries because you need to charge them up every single day so that they do not damage themselves. Lead acids like to be fully charged all the time. So that means that a 200Ah lead acid battery is the same as a 100Ah LFP battery.

However, we need to consider Coulombic efficiency losses. Most of the AGM lead acids, it will be 90-95% efficient whereas LFP batteries are 99% efficient. With a cheap flooded battery, they have only 70-80% Coulombic efficiency. So instead of a 200Ah lead acid battery being the same as a 100Ah LFP battery, it’s more like 220 to 230Ah because the internal resistance is so high in lead acids. So, long story short, a 100Ah lithium is the same as a 220Ah lead acid and if you’re using a cheap flooded one, you can bump that number to around 250Ah.

The next factor is the charge cycle life. This is where lithium ion destroys lead acid. First, let’s take the cheapest available AGM and look at the data sheet (shown below). You can see that you will get only 500 charge cycles at a 50% depth of discharge. 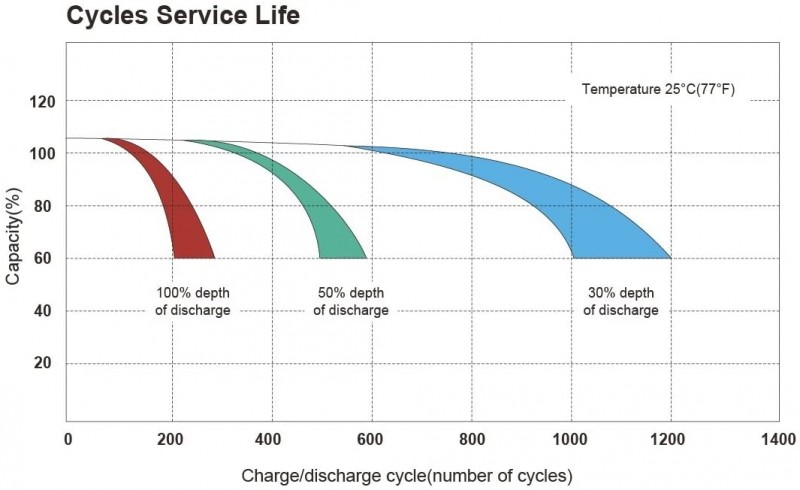 If you buy a high-quality AGM lead acid, you’re going to get 1000 charge cycles at a 50% depth of discharge as shown below. 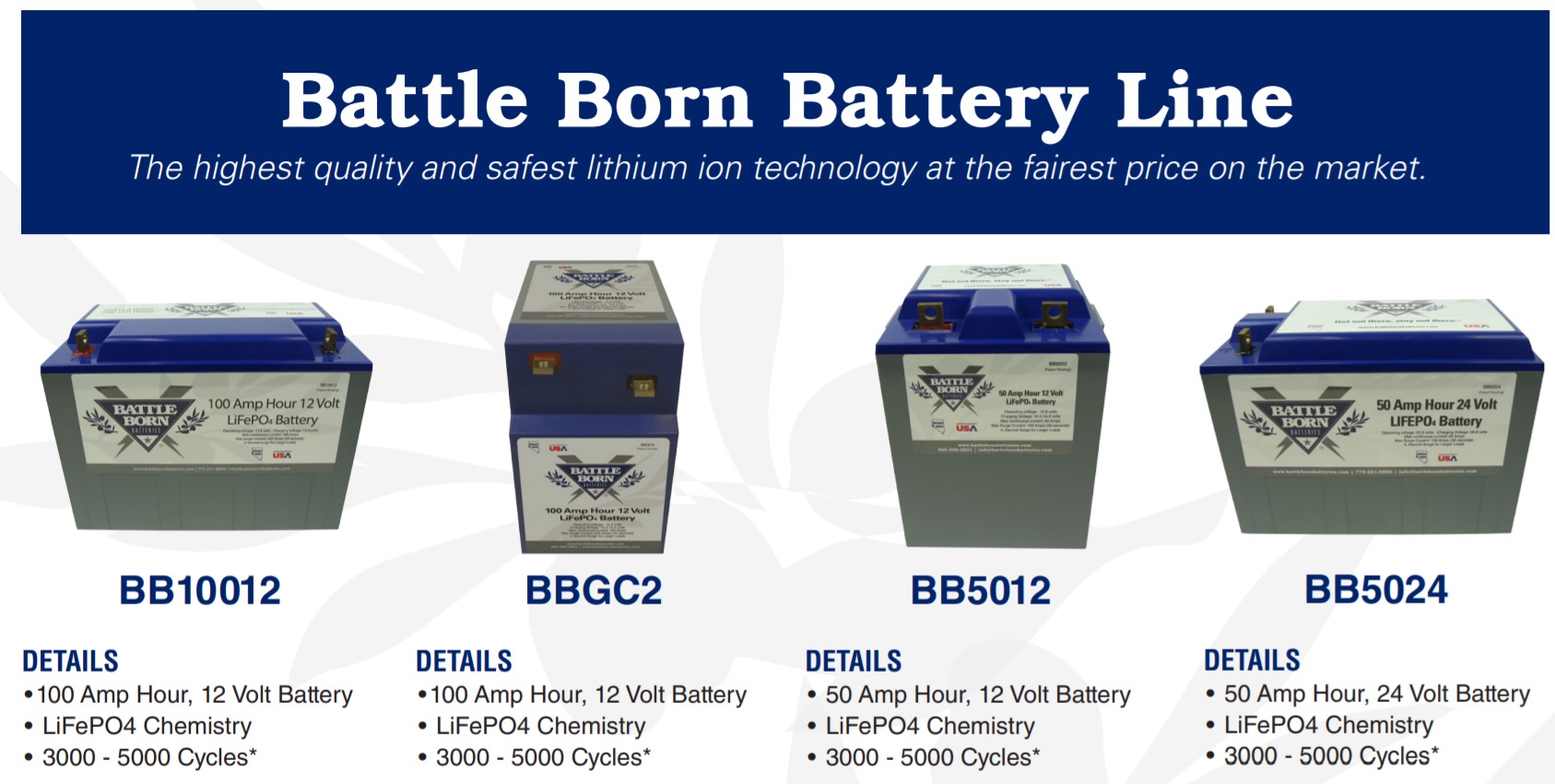 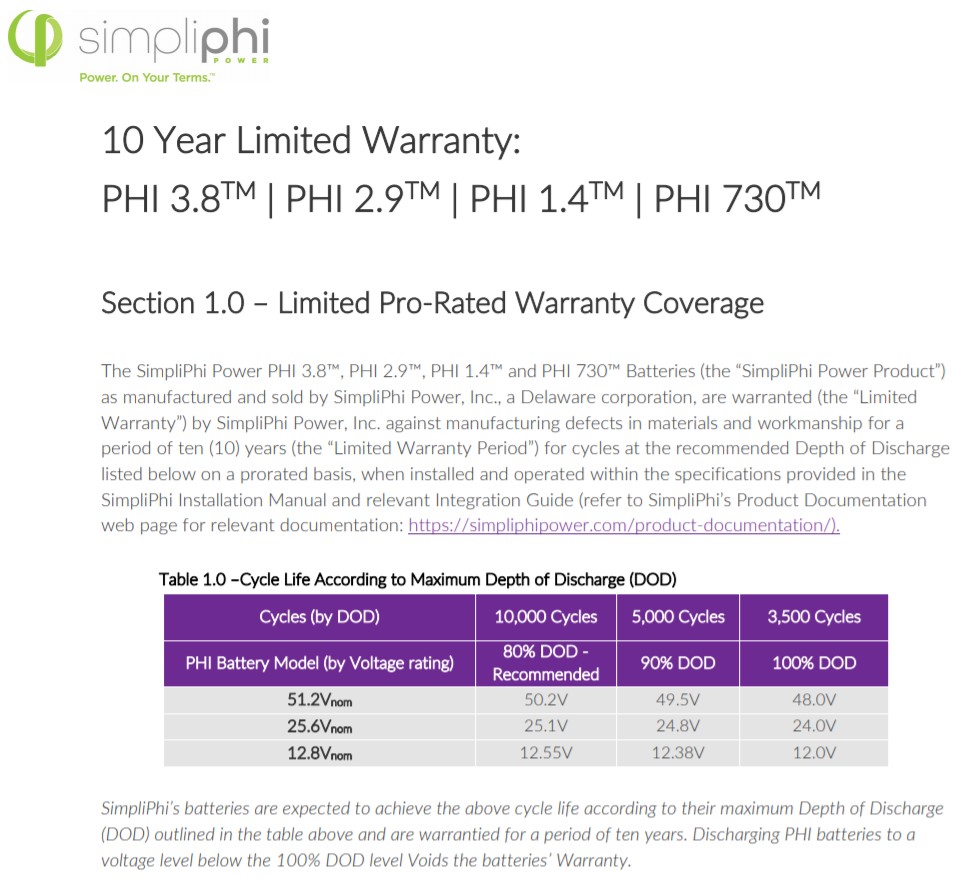 So the lithium ion batteries are 5 to 10 times cheaper than the AGM batteries already if you are comparing an affordable LFP to a high-quality AGM lead acid battery. The price comparison is just way off the scales. Typically, LFP batteries will last 5000 charge cycles for solar because of the C rating (or how fast we are charging & discharging this battery). 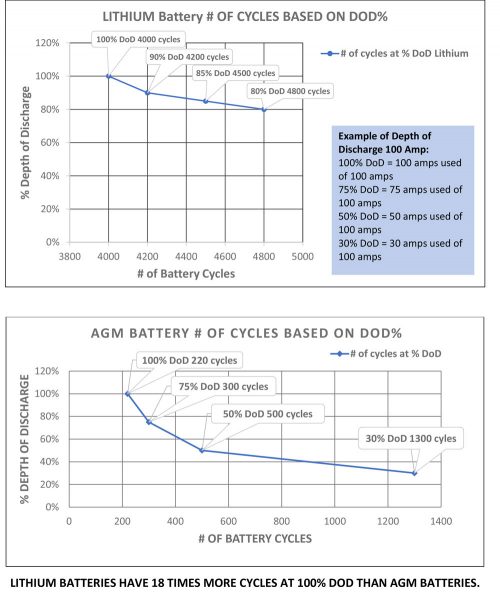 It is so easy to hit 5000 charge cycles with the LFP batteries considering the C rate that we’re working with. Even if we have a low C rate for a flooded lead-acid, the Coulombic efficiency losses alone mean that we need to make the capacity so much larger just to even get those charge cycles for our specified application and depth of discharge. It is so hard to get power out of lead acids. It’s very difficult.

The next factor is

Lithium ion are a lot lighter than a lead acid battery. A 100Ah lead acid weighs around 32 kgs whereas a 100Ah LFP weighs 14 kg. However, remember that we need 2.5 times of the lead acids to make one LFP battery to get the same usable capacity. So think about that for a second. We’re talking like 80 kgs of lead acid battery to make the same as a 14kg LFP battery. There is a huge difference in weight.

Now that we understand the usable capacity and the charge cycle life, let’s do a quick cost comparison.

So we understand that we need 200 to 220Ah of lead acids to make one 100Ah LFP battery. For a comparative study, we will check the price for both of these battery types on US websites since in India, the price is not published online.

A 100Ah LFP battery costs around $600 whereas an AGM lead acid 12V, 100Ah is $275 on their website right now but we need to double that to give us $550 for same usable capacity – a difference of just $50. So for the price of the lead acid (without Coulombic efficiency or Peukert effect losses), we’re really giving lead acids a hard chance right now. It follows that a $600 LFP is on par with a lead acid if you factor in the usable capacity and efficiency losses. Now if you factor the charge cycle life into this, it makes lead acids 5 to 10 times more expensive over the long term.

I mean there is a huge price difference. Lead acids cost so much more money. Even the expensive lead acids (that last longer than the cheaper ones) cost way more than the LFP. So if you see those cheap lead acids and you calculate how much you get for how many years, you realise that you are spending more than what you bargained for. The lithium batteries that cost more (like Simpliphi Power) – they have a 10,000 charge cycle life guarantee which is incredible and a battery made of lithium titanate can pull 20,000 charge cycles! I would not use lithium titanate for solar right now due to its cost but I’m just trying to make you wrap your mind around the price difference. It is substantial. LFP is so much cheaper overall. It’s a no brainer.

It’s hard for me to even imagine why anybody would use lead acids still but if you are building a system that will only last 2 or 3 years – lead acids can work. The biggest disadvantage with LFP is when we design a battery with LFP (especially a drop-in lead acid replacement), we are limited by the BMS discharge rate. Note that a 100Ah LFP can only discharge 100A continuous. So if you have a 12V, 2000W inverter and you want to run a load that draws 150A, you would need to buy two numbers of 12V, 100Ah and connect them in parallel so that you can pull 150A.

Where lead acids fail is when you have to deeply discharge them. With lithium ion, they don’t care about deep or quick discharge since Peukert’s effect doesn’t apply and you also don’t need to charge them up every single day. You always want to cycle lead acids and charge them up all the way to the top every single day. So that’s why a lot of people need to make a large solar array to make sure that their lead acids stay healthy. With LFP, it doesn’t matter. You can keep LFP at 50% state of charge for months and it will like that. It will actually last longer. So lead acids and LFP have very different thermodynamic properties.

With LFP, the internal resistance is so low and the voltage curve is slightly higher but still advantageous for 12V appliances that you will have good performance until the LFP battery is dead.

Next factor is safety. Some lithium chemistries are combustible and they are absolutely dangerous. However, LFP and lithium titanate are non-combustible. I can literally shoot LFP batteries with a gun and it will steam a little bit but there will be no fire. Check video below:

Compare that to lead acid – if you overcharge lead acids, it starts gassing and the overpressure valves can’t handle it because this is sealed recombinant system. Lead acids can explode. When lead acid batteries explode, you have sulfuric acid flying all over the place. So I would argue that LFPs are way safer than lead acid batteries.

The next factor is Charge Algorithm.

You can use a constant voltage to charge LFPs. I mean you can set your absorption & float and be done, and it will work perfectly fine. With lead acids, you need multistage charging. You need temperature compensation and you need to do equalization. With AGM, you can technically equalize it but it’s kind of hard to do it right. It’s very easy to over gas and lose some of the electrolyte through the recombinant system. So it is not recommended. You just want to stick to the AGM sealed settings on your controller. LFPs are actually way easier to charge. It’s just constant current for a long time and then constant voltage for absorption and then you just float it. It’s so much simpler to charge LFPs.

Many people will come up and say, “Oh… my solar lead acids have worked for 8 years straight and they’re still going strong”. That is incorrect and if it’s still going strong, it’s because they’re not using them. They are not using the capacity of those lead acid batteries. You cannot fight the laws of thermodynamics. You cannot change the numbers on those data sheets. Physics-wise, you are constrained by lead acids to whatever they can give and if the lead acid battery did last 8 years and internal resistance isn’t much higher due to sulfation, then they’re not using the battery. So please just ignore it when people say that.

Next fact is that LFPs can charge a lot faster than lead acids. If you realise how hard it is to push power into lead acids due to internal resistance, you will understand that you need a lot more solar panels on your roof to accomplish it. Another factor is that with the solar system, you have peak sun hours for around five hours a day and that’s when the batteries need to recharge. If you are trying to do an equalize function on lead acids and you’ve been setting the voltage to 14.5 and you trying to equalize those properly and adding water, you’re going to be in for a bad surprise when those lead acids die very quickly. We have seen sites where two sets of lead acids were installed but they died very quickly within 1.5 years. They had extreme decreased performance and capacity. There are some studies and safety bulletins saying to charge the lead acids up to 14.7V because they are chronically under charged but it is very difficult to do when you’ve a solar system to keep your batteries at 14.7 constantly with 12V panels and only 5 hours of sunshine a day.

Another thing is form factor size. If you look at an NMC battery (like a 5kW battery pack with the Tesla), it’s around 25kg and it’s small in size. Do you know how much lead acid you would need for a similar 5kW @ 50% DoD? You would need around 275kg. I mean, you need a huge bank of batteries whereas a Tesla battery can fit on a wall. With lithium ion, specific energy is double that of NMC. So form factor wise, LFP is just so much smaller than lead acids.