Till recently the policy in Karnataka for some of the consumers had been Gross metering(GM) and some had Net Metering(NM). A recent circular from BESCOM has given option for some of the consumer segments- residential, hospitals and institutional the option for opting between gross and net metering. So what are the two types of metering? And what are the pros and cons of the two?
DEFINITION
As per BESCOM following are the definitions of the two type of metering:
Gross metering:
The total energy generated by the solar rooftop plant is to be injected into the grid without allowing the generated solar energy to be consumed directly by the consumer.
Net Metering:
The energy generated by the solar rooftop plant is first allowed for self-consumption and the excess energy is injected to the grid. 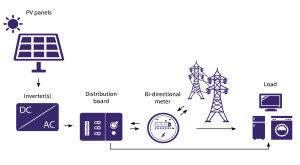 The latest circular also limits the SRTPV(Solar Roof-top Photo-Voltaic) capacity to 100% of the sanctioned load of the building. Which means that if a buildings sanctioned load is 5 kW, the maximum solar that can be installed is 5 kWp.
Here is a comparison of net metering and gross metering on various parameters:
CONNECTIONS
One of the major difference between the two type of metering is in the connections.
NM- In net-metering, the solar power generated is first intended to be used within the building and only excess is exported. Following is the BESCOM approved drawing for Net-Metering:
GM: In-gross metering, the solar power and the power needed for the building are two separate circuits. Following is the BESCOM approved drawing for Gross-metering:
NO:OF METERS
Both the metering type has two meters a bi-directional meter and a uni-directional meter. The meters are used in different ways.
NM- The bi-directional meter calculates both the import of power(energy imported from the grid). The uni-directional meter will measure the total solar generation.
GM: The bi-directional meter is used to measure the total solar generation and the uni-directional meter will measure the total import of power.
BILLING AND PAYMENT:
Net-Metering: There is only one bill generated which will give a measure of both total imported energy and total exported energy. The difference between both is taken and the payment is based on the net of import or export. In case of net export(export greater than import) the BESCOM will pay(account transfer) Rs. 7.08 for the net exported energy. If the import is more than export, i.e. net import, the consumer will have to pay the BESCOM at the prevailing tariffs(slab based).
Gross-Metering: There will be two bills generated, one for the total export, where the BESCOM pay the consumer(account transfer) and the other for the total import(regular electricity bill), where the consumer pays the BESCOM.
FINANCIAL BENEFIT COMPARISON
For both the metering scheme, a PPA(Power Purchase Agreement) is signed between the consumer and the BESCOM which is for 25 years. As per the new guidelines, consumer can choose one of the metering and cannot change to the other later(irrevocable). This means that the financials play a crucial role in the choice of the metering.
GM: The returns from the solar is fixed for 25 years as all the energy generated is exported and the PPA is for 25 years. The trend of regular electricity bill has been that there is a hike in 5 to 7% in the rates year on year. This means that the cost of electricity that we intake from BESCOM would increase every year.
NM: The return from the solar is dependent on what is the savings on the electricity bill due to the installation of the solar system. As the electricity bill increases every year, the savings from solar also increases.
Right now as the export rate for solar is 7.08, GM has a marginal advantage in terms of revenue generated. But within a few years, the benefit from self-consuming the energy will make NM more advantages. As solar is a long term asset, NM has better advantage in terms of financials.
As there is only one bill generated, there is less confusion in terms of the payment to be received from the BESCOM and the amount that has to be paid to BESCOM.
Overall, we feel both in terms of financials, long term benefits and ease of the system, net metering is the best and that’s why we call Net-metering the NEAT METERING
Spread the love
By Santosh CK|2018-01-17T18:20:53+05:30October 4th, 2016|0 Comments

About the Author: Santosh CK