Note: This blog is for battery enthusiasts. To understand peukert’s law and with an intermediate knowledge about batteries and terms like C-rate.

Let’s talk about the capacity of different solar batteries in real-world circumstances because battery manufacturers are advertising a capacity rating in Ah and a lot of people don’t understand all of the factors that determine the capacity of a battery; specifically lead acid batteries.

So, before we dive in, let’s talk about some of the various factors that can determine the capacity:

First, it is temperature. The colder your battery is, the less capacity that you have.

Next, the type of battery. If you have a lead-acid battery, you can only discharge it to 50% state of charge to have an increased life. So, if the battery is rated for 120Ah, you can only use 60Ah (50% of 120Ah). This is known as the Usable or True capacity of a battery. Lead acid batteries typically only provide 50% usable capacity from the Ah rating. This means that if your application requires 100Ah of usable capacity, you would have to size a lead acid battery bank of 200Ah.

However, if you’re using Lithium batteries, you can use typically 100%. A Lithium Battery can be fully discharged down 100% without damaging the battery. This factor alone tilts the scale against a lead-acid battery.

The next factor is Peukert’s effect and what this means is that when you discharge lead acid batteries at higher rates or C ratings or you use larger loads, the efficiency of that battery drops because the internal resistance (or how hard it is to put electricity in and out through that electrochemical reaction) increases and the more you demand of it, the less efficient it becomes. This decreases the battery’s capacity; because you are losing efficiency; because there is heat being generated by this resistance in the battery and this can be substantial.

So, let’s look at some datasheets and think about this for a second. Let’s look at the US 27DC XC2 datasheet which is a flooded lead-acid battery advertised as 105Ah.

If you look at the bottom table, you will see the hour rating, and the capacity you get at those ratings. So if it takes 20 hours to discharge the battery, we will have 105Ah but because this is a flooded lead-acid, we need to cut this number in half because that is what is usable to have a decent life. So instead of 105Ah, you’re actually getting 52.5Ah (with small loads) but most people do not use a battery over a 20 hour span. Typically, they will use it in a 5 hour rate and under a high discharge application, you will use it in 1 hour.

Now let’s check the datasheet again and see the 5 hour rate. It’s 89Ah which means 44.5Ah is available for this supposedly 105Ah battery. Now let’s check the 1 hour rate. We have 69Ah. So that means if you discharge this battery in 1 hour, you only have 34.5A available (with large loads). So if somebody sees the 20 hour rate that’s advertised on the front of the battery and they think, “Oh! I have 105Ah” – they need to curb down their enthusiasm. Technically, if they’re using it for a high discharge application and they discharged it in 1 hour, they are only going to have 34.5Ah. That is a huge difference!

Now let’s look at the datasheet of a Sealed lead-acid battery advertised as a 100Ah. This is the US AGM 31 by US battery.

If you go down to the 20 hour rate, it’s rated for 100Ah but we can only use half of that which means it’s only 50Ah battery. Now let’s go to the 1 hour rate. If we take 66 and we cut it in half, we only have 33Ah. So, a sealed lead-acid that is rated for 100Ah can only deliver 33Ah in ideal circumstances under high discharge rates (for large loads).

Now let’s take this one step further and add temperature into the equation. If you are discharging this battery in 1 hour and it’s at a cold temperature such as Zero degrees Fahrenheit, this 33Ah rating will drop in half. You will only have 16.5Ah of usable capacity for this sealed lead-acid. 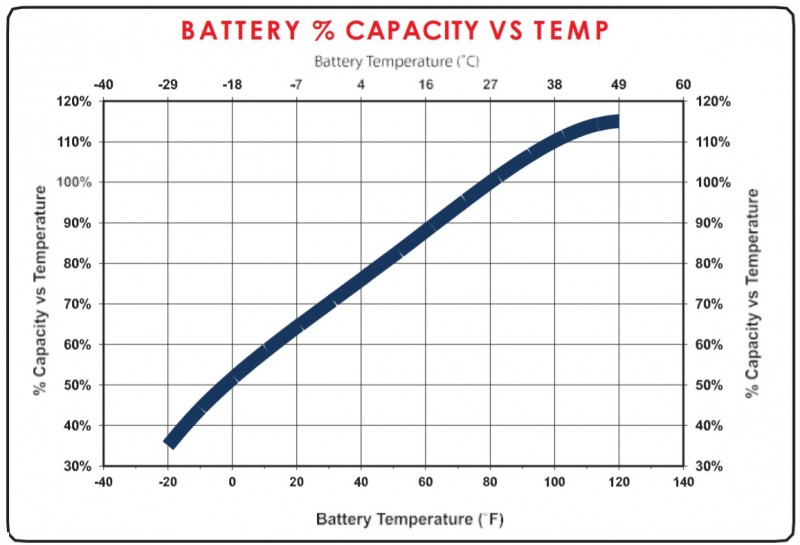 If you use the 5-hour rate, it decreases to 185. If you go down to the 1-hour rate it’s 157 and if you cut that in half, we’re looking at around 78Ah of usable capacity at high discharge loads. So what does this mean? This means that lead acids do not like high discharge currents and if you use them, the efficiency drops significantly. However, this does change if you have a larger battery bank.

So, if you have a large lead acid battery, the 20 hour rate may work for your system if you’re using solar power. However, if you have a very small battery bank and you are using it in a mobile system such as a van and your battery bank is not that large, these C ratings will drop your capacity significantly. If you power a microwave, for example, in a van off-grid solar power system, the capacity that you have will be significantly less than a house system where you have a large battery bank. A lot of people are using smaller lead acid batteries in off-grid mobile systems and vans, and so that 20 hour rate does not apply to them. So, the advertisements that they see are quite frankly misleading and they should be using around the 5 hour rate because that’s typically what you’ll be using in an off-grid solar system in a van.

Now let’s talk about Lithium batteries. First the usable capacity is not 50% like a lead acid. It’s 100%. Next there is no such thing as Peukert effect and as the temperature increases, the capacity increases with lithium. However, lithium in cold temperatures does have decreased capacity. You can’t really get around that and to explain this let’s look at this quick excerpt from a study – “A critical review of using the Peukert equation for determining the remaining capacity of lead-acid and lithium-ion batteries“:

“Peukert’s law was developed for lead acid batteries and works well in that application.

So let’s recap. Isn’t it disappointing that though you have a 100Ah lead acid battery, it will only deliver 15 to 30Ah!! However, if you take a lithium battery it will deliver what it’s rated for. So if you have a Lithium battery and it’s rated for 100Ah, whether you discharge at a 1C rating or a 1 hour rate or a 20 hour rate, you will still get 100Ah no matter what.

When a battery is given an Ah rating, it is always accompanied by the number of hours that rate is taken at.  The most often listed rate is 20 hours (C20) or 10 hours (C10).  So, let’s say that we have a battery whose capacity is 100AH @ 20Hr. This means that the manufacturer slapped the 100AH rating on the battery after testing that battery for 20 hours with an actual amperage drain of 5A.  What this also means is that your load of 15A will not actually last 6.6 hours (20×5/15), as one may think, but a much smaller number. Fortunately, there is a very handy formula to figure out exactly how long a lead acid battery will last, under any load.  It is called Peukert’s Law. Peukert’s law expresses mathematically that as the rate of discharge increases, the available capacity of that battery decreases.

The formula that states the Law in a usable format is as follows:

The formula, as we use it, is then rewritten to:

It is the discharge rate at the time to discharge eg. the new AH rating.

What can we do with this information?

Now, we can calculate the true capacities for solar batteries under different scenarios. The first battery that I want to compare is the Lithium. If you have a 100Ah Lithium battery, it will deliver 100Ah at whatever voltage it is rated for. If you have a large battery bank, the Peukert effect doesn’t change the discharge rate efficiency. So a 500Ah battery bank made with Lithium batteries will be able to deliver 500Ah and that’s it. It’s nice and simple.

Now let’s talk about sealed and flooded lead-acid batteries. With the Peukert constant, if you have a 100Ah sealed battery discharging 100A for 1 hour, we are using the 1 hour rate and it will supply 66Ah. At a depth of discharge of 50%, its true capacity will be 33Ah. So if somebody is using a 100Ah battery under high discharge situations, it will only give 33Ah of capacity.

Next let’s take a 100Ah lead acid battery and discharge only 10 amps for 10 hours. So if somebody has LED lights or a laptop or something small, this battery will supply 92Ah and at a depth of discharge of 50%, its true capacity will be 46Ah. So 100Ah being slowly discharged for off-grid solar power systems will only deliver 46Ah.

Now, the next situation will be a lead acid battery but it will be a larger 500Ah battery and if it’s discharging 100 amps, it will not have as much of a Peukert effect because it can handle that discharge rate. So that means instead of using the 1-hour rate we can use the 5 hour rate. So, at the 5 hour rate, this 500Ah lead acid battery will supply 425Ah and at a depth of discharge of 50%, its true capacity will be 212.5Ah.

However, all of these numbers will decrease by 10 to 50% if the temperature is cold. If it’s really cold, it can decrease even more. So people need to understand the true capacity ratings of their batteries.

We have seen people bragging with their big branded batteries and they’ll put a bunch of 12V batteries in series for 24V and they go, “Oh yeah!! I’ve got 500Ah”. Technically, you probably have 200Ah and under the loads that people use it for, you probably have 150Ah. Honestly that’s how much you truly have.

What we are trying to say is that for lithium, the advertised capacity is way more exact than any sealed or flooded battery available, and for solar power systems that are using small batteries the discharge rate and efficiency matters a lot. So people are better off buying and spending your money on a Lithium iron phosphate (LFP) battery with efficient discharge rates than to buy like a 300Ah lead acid battery. Lithium batteries are slightly more expensive (upfront cost) but they last 5-10 times more and so, in the long run, they work out cheaper. So you are better off buying lithium today because you’ll have more usable capacity.

Even if you don’t factor in the cycle life, or the warranty or any of the other benefits of lithium, with this one factor of Usable capacity alone it means that buying lithium is value for money. I hope this helps you. We see a lot of advertisements floating around with big numbers like “300Ah”. It’s not true in real-world circumstances and Peukert effect is a real thing. It’s measurable and it’s a big reason why people should switch away from lead acid. For the applications that I see people wanting to use batteries for – a lithium iron phosphate (LFP) seems like the best option all around.