When we see the ratings on AC components like transformers, power is usually rated in KVA. This is called apparent power which is the combination of active and reactive powers.

Active power is the real power component of the supply that is used to do the real power (utilized power) which is measured in watts. Its basically consumed by resistance loads like electrical heaters, incandescent lamps,coffee makers etc. Reactive power is imaginary component consumed by the energy storage elements like inductance and capacitance expressed in VAr and is consumed by appliances like ac’s, transformers, motors etc.

AC waveforms are usually sinusoids. Loads are of three types. Resistive, inductive, capacitive. When the load is resisitive, the voltage and the current waveforms are in phase with each other. If it is inductive, current lags the voltage and if it is capacitive, current leads the voltage. Inductors and capacitors draw zero real power yet, they manage to draw current and result in voltage drops. Inductor absorbs reactive power and capacitor delivers. 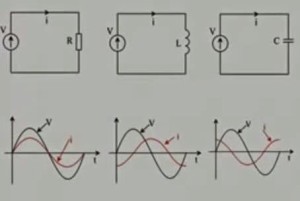 The loads that we use are mostly resistive and inductive. So in order to maintain the power factor unity the inductive reactive power must be compensated using capacitor banks.

Low p.f presents with a heavier generation and transmission burden on the power grid and deposits a larger carbon footprint. Storing energy in electric and magnetic fields of reactive load and releasing it back to the grid on each AC cycle is possible due to the phase angle between voltage and current.

Generation losses in non conventional systems are mainly due to the presence of generators and also due to the auxiliary consumption from the grid after plant hours for loads such as street lights, control room and mains, bore wells and monitoring networks. There is no need of rotational equipment in the presence of solar inverters. But sometimes inverters consume auxiliary reactive power. Solar inverters are equipped with semi conductor devices which are capable of creating lagging and leading currents with respect to voltage by changing the phase angle. So, reactive power compensation is required.

Also, let’s see another case. Power factor can be decreased in 2 different ways.

The second case is the cause of reduced p.f using photovoltaic systems. 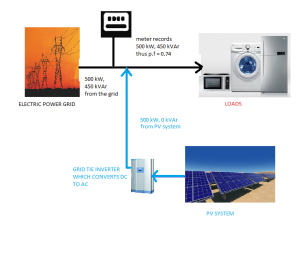 Now, lets introduce a pv system which delivers a power of 500KW, 0KVAr. These are designed to deliver power at unity power factor. So, the entire burden regarding reactive power is on the grid. The load takes up 500KW from the grid. Now, the meter records 500K, 450KVAr ensuring a p.f of 0.74. so, we can see a drop of 18.7% in power factor. In order to compensate for this loss, we need to go for capacitive banks which can generate reactive power and compensate losses.

In addition to that, the voltage drop of transmission lines and distributors increases as power factors decreases. In order to keep up the voltage at the receiving end, expensive appliances like booster has to be installed. An improved power factor apparatus will reduce this installment cost, however.