A full-time Project Manager would be appointed during the planning and execution of the PV plant. The PM would be sufficiently empowered to coordinate, implement, maintain and monitor the overall quality issues of the project from the initial stages to final commissioning and handover. 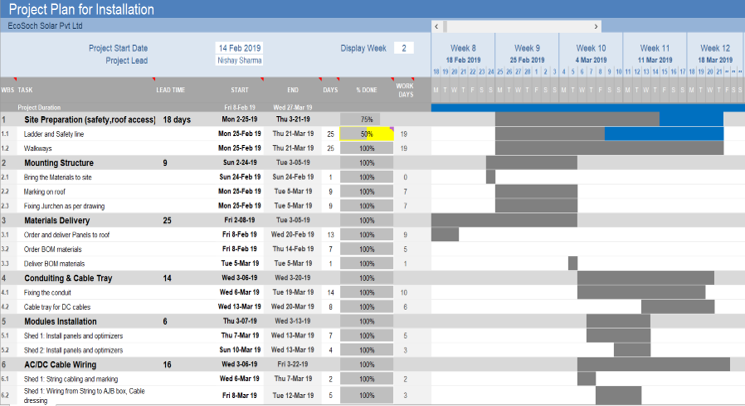 During project execution, the deliverable at each stage would be reviewed by another team thereby ensuring accountability and reducing the risk of errors creeping in. In fact, the Site Visit Report, which would be one of the first deliverable that would be prepared, would be shared with the client for approval so that client is aware and would be able to visualize how the system would look like after installation. All aspects would be covered in the Site Visit Report like shadow analysis, module placement, cable routing, earth pit location, etc. In case the client wants to change certain aspects, they can inform us and we would be able to accommodate them.

Once the site visit report is verified, SLD & other layout diagrams are prepared which is shared with EcoSoch’s O&M team called SolarCare for approval. Once the review comments of SolarCare are incorporated and the final approval is obtained, the drawings are frozen. BoM preparation would start after finalizing the drawings and the BoM is sent to the Installation team for approval. Thus, having a robust “checks and balances” procedure has allowed EcoSoch to avoid mistakes to a large extent and decrease the risk of rework at later stages.

After installation, SolarCare will thoroughly inspect the system with a 34-page checklist that has been developed in-house and submit the inspection report to the Project Manager. In case of any issues pointed out by the SolarCare team, such issues need to be rectified by the Installation team after which the project would be handed over to SolarCare team. From thereon, the project enters the O&M phase wherein EcoSoch provides workmanship warranty (typically for 2 years) since commissioning date.