Why Solar Panels are installed at certain Angle? 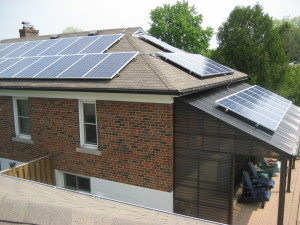 A hundred and fifty million kilometers away from earth, being a nearly perfect sphere of hot plasma, sun emits around 3.86×1026 watts of energy. But only 1.74×1017 watts of energy is received by earth with the world’s yearly consumption being around 1.8×1013 watts. Harnessing this amount of energy from sun would save the earth from global warming and also the problem of fossil fuels being depleted. But nevertheless, it is difficult to do so with the present day technology. There has been an increase in demand for the re-new-able energy systems due to their whole lot of eco-friendly advantages. One of their kinds is solar energy system. Many researches are being carried out to increase the present day’s solar energy system’s efficiency and solar panel angle.

Designing of solar panels and their orientation/solar panel angle play a major role in defining system’s efficiency. In this post, we are going to discuss the orientation aspect of the installation.

Starting with simpler terms, the amount of solar radiation striking a surface at a particular time and place is called insolation. This is nothing but power and is expressed in watts per square meter and usually presented as an average daily value for each month. On a clear day, the total insolation striking the earth is about 1000 watts per square meter. Before installing solar energy system, one always thinks where on the site and in which direction should the panels be placed. The orientation of panels is crucial because it determines the insolation absorbed by the surface which will be converted to electrical energy.

While the solar radiation is constant, the radiation on the earth’s surface varies due to the following reasons

As the sun changes its position every hour due to the rotation of earth, there is no exact direction towards which the panels can be faced always. So, the system design should be in such a way that solar collection is optimised by positioning the array to take full advantage of maximum amount of sunlight available at a particular region. 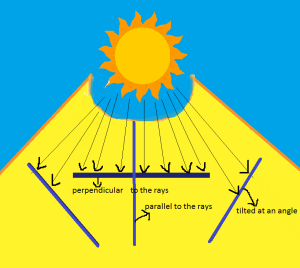 The panels receive maximum amount of radiation when sun rays fall perpendicular to their surface and minimum amount when sun’s rays fall parallel. The ideal way is to orient the PV panels horizontally to face the sky directly. This allows us to collect the maximum amount of solar radiation with the least obstruction. However, in practical situations, there might be obstructions like trees, buildings, etc. In such cases the panels are placed in a particular direction at a selected angle (elevation). And these angles and directions at which panels are faced and tilted depend on the sun’s orientation and the latitude of the site respectively.

So, why do people ask to keep the panels orientation/solar panel angle towards south and tilt angle equal to that of latitude of the site?

So, when the tilt angle or the angle at which the panels are elevated is equal to latitude, the insolation is optimized. The site’s latitude also determines whether the sun travels in the northern sky or the southern sky. In the northern hemisphere, the sun travels towards the southern sky. So, when the solar collectors are placed facing towards south, maximum amount of solar energy strikes their surface. Panels should be oriented in such a way that maximum of the available energy must be absorbed during the shortest day or the winter solstice.

What is azimuth and how does it affect the orientation/solar panel angle?

The sun’s apparent location east and west of true south is called azimuth, which is measured in degrees in east or west of true south. Since there are 360o and 24 hours, sun appears to move 15o in azimuth each hour. The magnetic south shown by a compass is not the true south. The earth is a huge magnet and its magnetic field axis is not necessarily aligned with the axis of rotation.  This deviation of magnetic south from the true south is called magnetic declination and changes with the time and location in turn with longitude and latitude. In other words, the performance of the PV system can be improved if fixed collectors are faced true south or 0 degrees azimuth, which is basically a favored orientation in the northern hemisphere. When the sun is true south in the sky at 0 degrees azimuth, it will be at highest altitude for that day. This time is called solar noon. 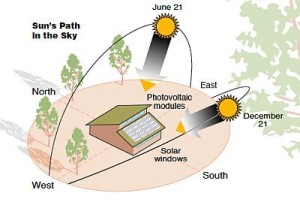 On fall and spring equinoxes, the sun rises at the due east of south and sets at the due west of south. Where as in winter months it rises at the south of true east and sets at the south of true west; in summer months it appears to rise north of true east and set north of true west. In winter, the sun appears to be at its lowest in the southern sky. So they must be tilted up from horizontal at an angle 15o greater than the latitude. Conversely, if a PV system is going to be used mostly in summer, where the sun will be highest in the southern sky, it may be most advantageous to optimize the performance of the panel by tilting it 15o less than the latitude.

There might be constraints where these orientations may not be possible because of the building construction or due to obstructions. In such cases, one needs to consider the shading factors and place the panels on the sunnier side. During afternoon, the demand for electricity is at its peaks, so it is usually advisable to place the panels facing west as sun travels from east to west.