Home/Solar/PV/Types of Solar Panels
Previous Next 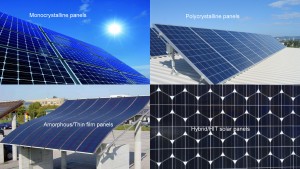 Many a times when a customer tries to go for a solar installation, he asks about panels and their types and their respective lifespans. Generally, panels are manufactured using polycrystalline cells. But every time a question arises regarding thin film solar cells which are light weight and cheap. Then why aren’t we using these panels? So, lets go into the basic technical details and a discuss further about the thin film solar cells.

There are essentially three types of solar panels.

First we will see how all these are manufactured and their pros and cons. We might come across some complicated names but nevertheless they are very easy to understand.

How do we get these crystalline forms?

Simple. There is a process called Czochralski process. Here, we melt our pure metalloid, and pour it into a crucible like quartz at a very high temperature like 1425 degrees. And then introduce a small seed, pull out a fine rod, pure form with all the atoms rigidly aligned in a firm network. Now we chop this rod into thin discs and put them on a substrate like aluminum frames. That’s how a solar cell- monocrystalline type is synthesized.

Next, polycrystalline type. Here we don’t take pure silicon but metallurgical grade and melt it. The process is different but pretty much its like pulling out a rod by introducing a foreign substance instead of just a seed. So, these are make easy melt and mould panels. They are melted and are poured into a mould and a grain (impurity) is introduced and the crystal is pulled out.

Amorphous on the other hand, is a form of silicon with high concentration of impurities which results in low efficiency panels.

These polycrystalline and amorphous types do not have a rigid network but a dangling network of silicon atoms. The degree of disorder increases with impurities.

The easiest way to recognize these panels is to see the shape of the cells on the substrate and their uniformity. Usually the cells aren’t rectangles and the gaps are seen in rhombus shape and the corners aren’t perfectly trimmed into rectangles.

The bonds between silicon atoms are very rigid and are organized into a firm structure. So, the perfect alignment of the atoms gives us the advantage of highest efficiency 21.5% when compared to the rest of the cells. They are space efficient and their life span is 25 years approximately.

The performance of the cell decreases at very high temperatures and are very expensive.

These are panels with rectangular shaped cells trimmed all along the substrate in a perfect rectangular form with non uniformity in the look.

In this case, the wastage of silicon is very less. They have less heat tolerance when compared to the mono type.

They have dangling bonds and the introduction of impurities will take away the free electrons in the bonding process decreasing their efficiency to around 16% and they are low space efficient.

These are called amorphous solar cells because of the presence of large number of impurities. These are thin layers deposited on a rigid substrate. Nevertheless, their manufacturing process is very cheap and can be easily done in bulk. They are light weight and are easily portable.

Even though the manufacturing processes are cheap and mass production is simple, amorphous silicon is very difficult to produce because the equipment and the materials must be developed from scratch including the supply chain.

They have low temperature coefficient and high efficiency under low lights. They are basically sustainable for low capacity loads. The rate at which they degrade is much greater when compared to the other types of panels. Also the presence of carbon content widens the electronic gap between valence and conduction band. This increases the light efficiency of solar cells made with silicon carbide layers. Electronic properties are affected by the disorder in the atomic network due to hydrogen concentration (impurity) and complex bonding along with impurities.

They require more space and more number of panels when compared to the other types. Cadmium is a part of thin film solar cells which is carcinogenic. Also, material like glass is used which hinders the output. So, there is no sense of investing so much just for the sake of shading tolerance. Also there are upgradation problems because of low production. Advisable for only mobile applications. In spite of having high temperature resistance, they have low efficiency due to defect density of hydrogenated amorphous increasing with light exposure, causing an increase in recombination current and reducing efficiency of conversion of sunlight into electricity. Also due to a special effect called Staebler-Wronski effect which is manifested in the first few hours when panels are exposed to sunlight, the yield is decreased.

So, what is this recombination current and Staebler-Wronski effect?

We know that the concentration of foreign elements and degree of alignment defines the type of solar cell because of less availability of free electrons. Accordingly the concentration of impurities and hydrogen is highest in amorphous. The Staebler- Wronski theory suggested that when intense light falls on hydrogenated amorphous silicon, the electron-hole pairs are created which again combine with neighboring Si-Si bonds that have weak foundation.

On the other hand, recombination process is more like cancelling out certain portion of existing current flow. During this process, lots of energy is released which creates defects and causes degradation of non crystalline structure which leads to  breakage and enhanced hydrogen diffusion and creation of dangling bonds (the H bonding with neighboring Si atoms) and this reduces the current flow by trapping electron hole pairs. The movement of hydrogen atoms is responsible for the creation of dangling bonds.  This reduces the solar cell efficiency upto 15% within the first 1000 hours. So, the early hours of explosion to sunlight leads to the decrease of efficiency which is not desirable.

Coming to hybrid solar cells, as the name suggests, these are multi junction solar cells. These are mono-crystalline silicon material covered with amorphous silicon on the top and the bottom. There is an intrinsic layer between the two types on either side which reduces the recombination process and gives a passivized interface. These are also thin film cells and can are bi-directional(energy can be synthesized from both the sides of panels). Their fabrication is much complicated and costly though they are known for their efficiency. So, presently they aren’t used widely in the market.