What is a on-grid solar system?

What is a on-grid solar system?

Electricity generated by a Solar Photo Voltaic (PV) system can be directly consumed by the load itself or can be  stored in a battery bank or can be sent out to the grid. A solar PV system in which the electricity generated can be sent to the grid is called an on-grid system. This type of system is widely used across the Western countries and is considered  the most efficient form of generation of solar PV system. There are three main components in this system. They are: 1. Solar PV panels 2. Grid-tie solar inverter 3. Bi-directional meter Solar panels generate DC current at a certain voltage that is fed to the grid-tie inverter. A grid-tie inverter inverts the DC power to AC 230V (single phase) or AC 415V ( three phase) and supplies it to the loads. A grid-tie inverter is connected to the output from Solar panels as well as to the grid input and to the grid output lines. While it’s the Solar panels that generate the power during sun hours, a grid input is connected to this inverter so as provide a reference voltage and a frequency to the inverter. This is used to sync up the frequency and the voltage of the power generated from solar panels  so that it can be transmitted to the AC distribution line. 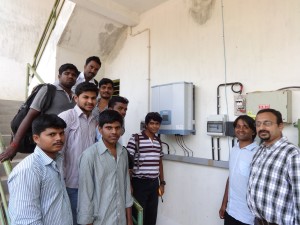 The newly inverted AC power is then consumed by the loads (kW) in immediate vicinity . In case if the connected loads are less than the generated power, the generated power will go out of your premises via your Bi-directional meter to the Grid. In this system, a bi-directional meter is required to record the amount of grid power that has come into your premises and the amount of excess solar power that is sent out to the Grid. Depending on the policy of each state, it’s possible to earn income for generating and sending the excess power back to the grid.